For many years prior to the September 11, 2001 tragedy; a secret faction inside the government of the United States of America had begun slowly eroding the liberties that our forefathers gave their lives to ensure.  American Intelligence operations blatantly ignored Constitutional protections for the gain of this small faction.  It spent significant resources to create a black market ecosystem for extracting wealth from the American people using the legal system, black market sales of drugs and guns, and it did it all in the plain view of the American people. 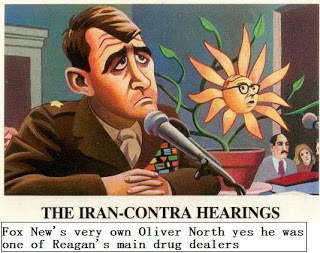 We sat back and ignored Iran Contra.  It was the end of the end for American Justice.  Many attempted to alert you to the fact that members of the CIA, DEA, and FBI were involved in domestic narcotics trafficking.. notably Gary Webb.  Oliver North himself acknowledged not only the institutional sales of large amounts of illicit drugs, but also that he was “authorized to do everything that he did.”  These narcotics sales, created a movement of large amounts of funds to off the books black projects conducted by American Intelligence.  These projects were the successors to operations like MK-Ultra, programs that were not only verboten, but expressly prohibited by the United States Congress.  Instead of acknowledging the oversight capacity of groups like the Senate Intelligence Committee, however, the NSC moved these projects to deep black status, and funded them using illegal means for decades.  Today, the result of this evil plan is a completely off the books mind control program, that is being used against innocent Americans, and politicians alike.
If you care to look, it’s pretty obvious that neither the CIA nor the KGB stopped researching methods of controlling the minds of humans after the Congressional hearings in the early 1970’s.  Both sides have repeatedly published, by accident, statements as well as research implying that they have succeeded in unlocking the secrets of the human mind.  Around the same time that the CIA’s Manchurian candidate programs became “public knowledge,” there were a string of assassinations and attempted assassinations which stink of the use of this technology against American President’s, political activists, and public figures.  John F. Kennedy, Robert F. Kennedy, Martin Luther King, John Lennon, Ronald Reagan; and the result of these horrific actions was nothing but whitewashing by the Congressional investigations which followed.  Ask yourselves why?  Possibly because the same technology being used to coerce these individuals into committing horrific crimes was also being used against the very people investigating them.  This is our reality.

This organization was once made up of a few, with broad sweeping connections into all facets of the bureaucracy which was spawned to manage the vast resources of the United States Government.  It was once called The Octopus for this very reason, though today it is no longer made up of tentacles, as it has consumed the whole.  Our government is in peril, and the corruption and evil which has given it its strength will one day be its undoing.  Before you today, the machinations of Constitutional liberty are aflame.  The Executive Branch has taken it upon itself, with no legal authority whatsoever, to make and pass law.  The Judicial Branch and Legislative Branches have failed to check this broad sweeping abuse of power, as is their mandate, and are now complicit in the actual and apparent movement from a Constitutional Republic to a Fascist Empire.   Today, the Constitution is no more than the opiate of the masses, something that is on display for you to see, as if it still protected you.
At the same time, the Supreme Court and The People have allowed for tragic abuses of civil rights since the tragedy.  In the same of safety and security, the Constitutional rule of law has been suspended.  What is before you is not the dysutopic vision of writers like Orwell and PKD and Alan Moore, it is much much worse.  The fingermen and thoughtpolice do not exist, at least they are hidden from plain view. Instead, our government uses twisted macroscopic psychological operations in order to control popular opinion.  They have created false flag attacks of terror, consistently, from the 9/11 operation to Sandy Hook; just as Orwell predicted.  In fact, the government of the United States told the entire world they were contemplating such false flag attacks when they declassified Operation Northwoods.  Writers, bloggers, film makers, and conspiracy theorists scream the truth day in and day out only to have it fall on deaf ears.  You cannot truly believe these events involve more nefarious activities than the mainstream view, or you would surely act… right?

Today Americans all around the country stand huddled for warmth from the fire of the burning Constitution.  In exchange for silence and complacency, it appears that the good law abiding citizens of America will sacrifice liberty in exchange for being left alone.  This has happened before, in pre-World War 2 Germany. They are not being kept warm though, the cold truth of a complete lack of democracy and freedom peers in at them from every angle.  The conspiracy theories run wild, but the true evil is staring all of you in the face.  It is the suspension of privacy, grand theft in the form of a illegally handled financial crisis (of dubious origin), and the complete lack of oversight of the executive branch, especially the Central Intelligence Agency and the National Security Agency.  Just a few weeks ago, John Brennen stood before the Senate Intelligence Committee, the very one tasked with oversight of the CIA’s activities, and flat out stated that the CIA would refuse to furnish that committee with information regarding the CIA’s activities… on national television.  Senator Wyden brought up a well known fact that seems to elude American’s as being a harbinger of doom.  The CIA has lied to Congress, and the White House repeatedly since its inception.  The agency is a run-away train, and its goals are not aligned with those of the American People.  The true evil is a complete lack of transparency and honesty from the White House, the National Security Council, and their related agencies.  These groups have lied to the American people consistently since the aftermath of 9/11; causing wars to be fought to disable weapons of mass destruction that do not exist.  Causing the invasion and topping of nations to find a terrorist who wasn’t even there.  The real reason for the wars?  Gas prices have quadrupled. The United States military now controls the largest opium producing nation in the world.  You no longer value your privacy, or your liberty.
What can be done?  I often ask myself.  I feel surrounded by like minded people, we can all see its happening.  Who wants to risk their own life or liberty, though, for the greater good of the group, when nobody else will stand with them?  How do we re-institute freedom in the land of the free?


I think the most normal thing to do now is to try and twist all of the “state succession” movements into something a little more plausible. Maybe a national signature campaign to “restore Consitutional law” — that is:

2 thoughts on “The Hidden Empire”