This is the second half of a short work of fiction, the beginning is here:
http://unduecoercion.blogspot.com/2013/02/the-obvious-alien-influence.html

What happened was not what anyone expected.  Instead of assisting us with increasing diversity in our gene pool, the aliens tricked us into inserting changes which enabled the complete enslavement of humanity.  Their mind control technology worked very well already, but without the changes the future was not written in stone, there was a resistance that formed, and eventually the masses were enlightened to the use of this secretive technology against them.  Knowledge of it did not save humanity, in and of itself, but it did spawn multiple countermeasures which resulted in a very long and drawn out hidden battle, eventually resulting in a withdrawal of the invasion. 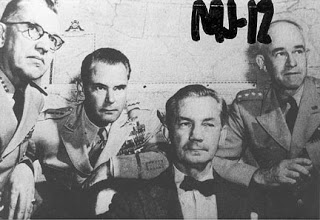 The secretive government operation tasked with changing our future began working feverishly in order to create a defensive weapon to stop the aliens from being able to enslave us.  They knew exactly what had to be done: a counter mind control machine which was able to keep the aliens from “putting us in the dark,” so to speak.  From the downed craft from Roswell, they knew exactly how the technology worked, though because of its very nature it was difficult to combat.  The aliens technology used the very fabric of the universe in order to change the thoughts of humans… quantum entanglement was used to inject electricity through time-space into the minds of men.  There was no way to shield it, since once entanglement occurred, it could transmit information though any type of shield.  In fact, it was very difficult to see exactly what the alien weapon was doing, since from a observer’s point of view it looked like normal brain function.  It was anything but normal; over the course of a few decades, the aliens would surreptitiously cause the destruction of our civilization from the inside.  The WOPR repeatedly reported that we were doing it to ourselves.  Those in power became evil, and their greed and lust were used against them in order to shut down not only the defense, but also the transportation infrastructure responsible for moving fuel and food across the continents.  MJ-12 began infiltrating the corporations responsible for globalization, in order to prevent it, and over the years companies like ExxonMobil, Walmart, and Monsanto would practically become proxies of this organization, without even knowing it.

The WOPR continued to report that the aliens won in the end though, and MJ-12 needed additional funds in order to create a larger defense weapon.  In order to do this, the WOPR suggested an unholy alliance.  It decided the only way to procure enough production to build a weapon broad and strong enough to defeat the alien fleet was to work with organized crime, and take over the international narcotics trafficking business.  They didn’t like it, but it made sense to them, and they set out to build a global system to counteract alien mind control.  Between 1984 and 1999 they privately launched a network of tens of thousands of satellites which would be used to protect the masses.  These satellites were given a good cover, at the suggestion of the WOPR, and today we have satellite television because of it.

By 1999, the WOPR began reporting that the aliens never come.  MJ-12 heralded it as a victory, they assumed that the alien race must have used their time machine, found that there was no way to invade the planet without significant casualties, and decided to just “leave us alone.”  There was another problem, however.  When the population found out what they had done, how they had saved the planet, they were very disappointed… and it eventually caused a global revolution against the “powers that be.”  This was unacceptable to the ‘saviors of humanity,’ and the WOPR had a plan to fix that too.

I couldn’t help but say to [Mr. Gorbachev], just think how easy his task and mine might be in these meetings that we held if suddenly there was a threat to this world from another planet. [We’d] find out once and for all that we really are all human beings here on this earth together. ~Ronald Reagan, 1985

A false flag attack could be used to unite humanity.  Reagan had already spoken about the idea, and the plan was put in place.  MJ-12 and its new allies in organized crime and the fallen intelligence network in the USSR would begin building a fleet of “alien looking” space ships.  This fleet would be used to stage a false flag attack, and in doing so would unite humanity and introduce the threat which caused their action.  This attack is scheduled for 5/25/2016.

What MJ-12 and the government did not understand, was that their WOPR, the time machine that they had recreated from the fallen alien ship, was compromised.  Using the same technology that transmits electricity into the brains of humans, the aliens were able to modify the communication from the future. They also were able to tap into the large network of satellites which MJ-12 had created, and they were using our very own defense network against us.

This had been their plan, the whole time.  Trick the world’s governments into building the infrastructure required to enslave humanity for them.  It’s exactly what happened.  Today, we are being attacked — at the very heart of our social fabric — with a weapon that we created to defend ourselves.  This alien force has complete control of every piece of electronics on the planet, using a global system we created ourselves.  They were aware of a huge security flaw in the computer an communications technology which they had planted on the Roswell craft.. on purpose.  It enables them to subtly influence our command and control infrastructure, and in a manner hidden from most, secretly pull the strings of our entire civilization.
They never planned on coming here, they didn’t need to.  Their goal has been the same since the spaceship was downed… on purpose.  Their goal has been to keep us Earthbound.  Stop us from colonizing other worlds and other systems, so we will never pose a threat to them.  Since building a global mind control network for them, our civilization has been tricked into depleting the planet’s fossil fuels.  The governments themselves have been tricked into becoming evil, violating not only their own laws, but basic human morality, in order to save the world from an invasion that was never going to happen.  We poisoned our own food supply, in order to attempt to end hunger.  Globalization destroyed the federated infrastructure that would have enabled us to survive were an invasion to happen.  Because we no longer had localized food and energy production, we have become sitting ducks.

In the end, MJ-12 figured out that it was the Vatican which was controlling organized crime, and the drug traffic from the beginning. They had been working with the alien force for hundreds of years, and the day the false flag invasion was scheduled to lose on purpose, it did not.  The Vatican and its allies destroyed major cities in the United States, United Kingdom, Germany, China, and Japan.  They had used more advanced technology to take control of the space fleet.

It might have been a grand test, to see if we would be willing to self destruct.
If it was, we failed.  Disclosure was the only way to succeed.