SILENCE IS FREEDOM
TYRANNY IS SECURITY
SECRECY IS POWER
In 1917, George Orwell and Aldous Huxley met at Eton College. Huxley briefly taught Orwell, and neither cites this time period as having anything to do with their inspiration for their disutopic prophesies. Regardless, their meeting is no coincidence, they were chosen by a force to deliver a message, one that is much larger than each of their individual masterpieces individually. They are collective proof of a telepathic force which routinely alters the course of human events, using the very mechanism by which these prophetic works were delivered.
Taken as Biblical allegory, Eton has an awful strong semblance to Eden. Out of Eton, came two works of art, which describe the proverbial fall of man. I stumbled upon the 1917 meeting, and found it hugely significant because of what I was looking for. Almost six months ago, I was searching through our history looking for the mark of a mind control influence on humanity. The parameters for the force I was looking for were simple: it was a piece of technology, something that could alter the thoughts of humans once they came in contact with them at any one time at any one place. It did this by using quantum entanglement to “connect” to the mind, and once this connection was made it would never be severed regardless of distance or time. What I found was probably akin to falling off of a toilet bowl and drawing a Flux Capacitor. 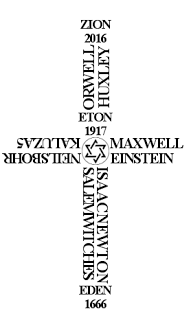 At Trinity College, from Isaac Newton to James Clerk Maxwell to Neils Bohr; the secrets of the universe, modern physics were imparted to men over a near four hundred year period. The information that was imparted was especially profound to me, because it was the very science that would be required for the mind control machine to work. It was my belief at the time that this force required human intervention in either repairing it or increasing its reach. In order to accomplish this it slowly and methodically transferred advanced scientific knowledge into our civilization, so it could be used during the 20th century in order to create a sprawling infrastructure which would allow it to perform this “magic” not only on a localized scale, but across the globe. The fact that they all attended a school called Trinity was especially significant to me, as I had just traced the influence of this machine through our modern times, using religious experience and epiphany as a tracking method. It seemed to me that the force was signing the divine inspiration of modern quantum physics with Christian iconography. As an aside, the story of Newton’s apple bears striking resemblance to the Eden story as well, and in my eyes is no coincidence. It could equally well be a parallel story, one designed to closely parallel the Eton descriptive works with a scientific explanation, instead of the effect, the cause. In my world of hidden meaning, it’s almost hilarious that the apple hit him on the head. Receiving the knowledge of physics wasn’t a choice, it was forced on us all.

In my search for truth hidden inside our own history, I was instead faced with something far more telling. Out of the 1917 connection at Eton, which epitomized exactly what I was searching for, came a prophesy which describes what I see in the world around me almost perfectly. Many people in the world today see mind control, they see it in the mass media, and in state distribution of narcotics. They see Brave New World almost as Huxley described it in the 1930’s, well before these things were a glimmer of reality. A world where the people are apathetic to their loss of freedom because of an inundation of entertainment that makes the government’s destruction of peace, liberty, transparency, and self-governance seem almost surreal.

At the same time, very few people see Orwell’s vision as much more than allegory. Thought police, depopulation, doublethink, and machines capable of physically changing the thoughts of humans are thought of as nothing more than science fiction. These ideas though, came at a time well before there was any evidence that they were even physically possible. There is, now, a significant amount of evidence that these things have been thoroughly researched by our own government, and the possibility that they are being masked by the Brave New World mechanisms of control are more real than you think.

As far as population control, modern folklore related to the Illuminati has been discussing the idea of forced depopulation for decades. The Georgia Guidestones mention it specifically, as do the Protocols of the Elders of Zion. Regardless of whether or not these things are hoaxes, or perhaps “set ups,” many modern conspiracy theorists discuss the poisoning of our food with genetic modification, and the fluoridation of our water supply.  Diseases like AIDS, Mad Cow, and Bird Flu appear to be man made, and targeted at specific cultures or ways of life.  Others, like cancer, have no publicly available cure, though cutting edge research intimates that the powers that be have been there for a long time.  Longevity is for sale.  It could be a coincidence, but there are so many more.

The truth behind Orwell’s idea of state sponsored terrorism should be more than obvious to anyone looking at the war our government is currently engaged in. We have invaded at least three countries in order to root out and destroy a small faction of Islamic terrorists. This organization, however, is publicly known to have been funded by the CIA during the cold war… it is their creation, a weapon against Communism. At the same time, the countries which were invaded happen to have huge value to large multinational corporations and organized crime: they are huge sources of competition in the oil and narcotics markets, and these wars have done nothing but solidify the position of the elite in those businesses. Ironically enough, after there were no weapons of mass destruction in Iraq, and no Osama Bin Laden in Afghanistan… there still is, and most likely always will be, a continuing U.S. Military presence.

The surveillance infrastructure in 1984 is all but a reality today. The NSA and related agencies have satellites covering the surface of the world, with real time imagery… that’s obvious. Unconstitutional programs like Carnivore and Echelon have been completely ignored by the public at large in the last half decade, for what appears to be no apparent reason. Congress even attempted to legislate away the Fourth Amendment so they could legally be allowed to continue. None the less, they continue without any legal basis whatsoever. At the same time, legislation like the Patriot Act and the NDAA have gone through Congress, despite massive public outcry, with no check from the Supreme Court — even though it’s their job to invalidate laws which violate the Constitution. The banking records, phone calls, travel plans, and internet postings of honest and innocent Americans are now available for the government to see… no matter what. And still, we do nothing.

Huxley told us of a world of state sponsored drugging. After the pretty obvious use of the U.S. military to intervene in heroin trafficking, and the equally obvious use of federal resources in the Crack Cocaine epidemics and the Iran Contra scandal, it’s hard to fathom an American that isn’t aware of the CIA’s involvement in not only international trafficking, but also domestic distribution. Gary Webb exposed it, and it cost him his career. Iran Contra should have stopped it, but instead showed the world that the CIA was willing to lie through its teeth to protect a revenue stream which allowed it to bypass Congress, and the People, in the funding of its black projects. What kinds of projects could they be working on…

As far as the thoughtpolice, MK-Ultra was exposed for the entire world to see, and since that time there have been numerous assassinations which have been linked to the use of the technology. Congress shut down the program in the early 70’s after it was made public. Sure they did. Sirhan Sirhan used mind control as a defense at his trial, saying he believed he was a victim of a government intelligence operation related to Monarch. Mark David Chapman described not only the experience of being mind controlled, for a significant portion of his life, but also linked it to religion. Shortly thereafter, John Hinkley Jr. attempted to assassinate Ronald Reagan, leaving his Vice President ‘in control’ of the White House. This particular person, happened to be a former director of the Central Intelligence Agency, and has been linked to the John F. Kennedy assassination. Hinkley also, has been linked to mind control.
In more recent history, people like John Norseen, and even the National Air and Space Administration have discussed using mind control and mind reading technology in public places, like airports, in order to thwart “terrorism.” Norseen passed away shortly before he was to attend an ethics debate regarding the use of the technology. We’ve already established that terrorism is being used as a tool to control popular opinion and allow a new age of imperialistic behavior just quiet enough that the people (and the media) rarely speaks about it. It’s also being used to invade the privacy of pretty much everyone on the planet… is it so much of a leap to think that maybe its more than just privacy that is being affected by the “war on terror?”
There are a growing number of Americans complaining of the use of mind control technology against them, however despite the reality that the technology has not only been researched, but perfected, they are ridiculed by the public and the psychiatric community as suffering from delusion. Psychiatry itself has taken very simple possibly weaponized effects of mind control, like synthetic telepathy, and made them a harbinger of mental illness. It’s not much of a leap to realize that these things could be used as a weapon to discredit the testimony, or silence the dissenting opinion, of enemies of a state which is using mind control on a daily basis.
The world Orwell described in 1984 is not so far away from plausibility. In fact, it could be our reality today, and the only thing that would be required to keep every red blooded American from seeing it would be… the very technology which he described. Perhaps it is the apparent influence of the mechanisms behind Huxley’s vision that keep the masses from actually seeing that Orwell’s is just as close, and written all over the conspicuously public history of the CIA and NSA. Perhaps we live in a world today that is a combination of both visions, and there’s a reason they were delivered to us with a link that clearly ties them together.

2 thoughts on “An Alien Link between Physics, Huxley, Orwell, and the Fall of Man”