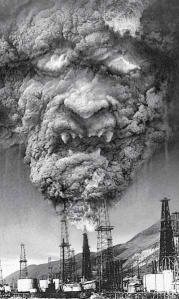 When he opened the Abyss, smoke rose from it like the smoke from a gigantic furnace. The sun and sky were darkened by the smoke from the Abyss.
–Revelation 9:2
If you haven’t figured it out yet, the oil we are routinely pulling out of the depths of the Earth is being used to steal the wealth and power of the population, and aggregate it in the hands of the few people evil enough to utilize the most scarce resource on the planet in order to subjugate the population.
What makes matters worse, is that this systematic wealth transfer is also destroying the environment, and will eventually lead us to certain doom.  It is perhaps the most evil plan ever enacted, and comes complete with an organized and concerted campaign to suppress the use of technology which would not only eliminate the energy problem, but serve to increase equality and prosperity in our society.


Today, there are two movements in the scientific community and the government which are attempting to give the impression of a movement away from the mass use of oil and petroleum byproducts en masse by the population.

As far back as 2003 (during the first term of the pro-oil Bush/Cheney Administration), a specially commissioned Pentagon report warned that rapid climate change could “potentially destabilize the geo-political environment, leading to skirmishes, battles, and even war” over scarce food, water and energy supplies.
Authored by Peter Schwartz, a CIA consultant and former head of planning at Royal Dutch/Shell Group, and Doug Randall of the California-based Global Business Network, “An Abrupt Climate Change Scenario and the Implications for United States Security” sought to “imagine the unthinkable.” The sudden onset of climate change, the analysts argued, would be little short of catastrophic: “Disruption and conflict will be endemic features of life… Once again, warfare would define human life.” So great was the risk inherent in such a scenario, Schwartz and Randall wrote, that climate change needed to “be elevated beyond a scientific debate to a U.S. national security concern.”
The political fall-out generated by the report wound up being almost as big a bombshell as the findings themselves. Far from being some crackpot venture, the top-secret study was the brainchild of Andrew Marshall, a legendary Pentagon advisor who had exerted considerable influence over U.S. military thinking for three decades. According to the British Sunday newspaper, The Observer, the then-82-year-old Marshall headed “a secretive think-tank dedicated to weighing risks to national security, called the ‘Office of Net Assessment.’ Dubbed ‘Yoda’ by Pentagon insiders who respect his vast experience, he is credited with being behind the Department of Defense’s push on ballistic-missile defense… and was the man behind a sweeping recent review aimed at transforming the American military under Defense Secretary Donald Rumsfeld.”
Completed in October 2003, the climate change study was promptly suppressed by the Defense Department until The Observer secured a copy four months later. In a February 2004 article, the newspaper cited the suppression as proof that the Bush/Cheney Administration, which had repeatedly denied that global warming even exists, was trying “to bury the threat of climate change.”

The US military has warned that surplus oil production capacity could disappear within two years and there could be serious shortages by 2015 with a significant economic and political impact.
The energy crisis outlined in a Joint Operating Environment report from the US Joint Forces Command, comes as the price of petrol in Britain reaches record levels and the cost of crude is predicted to soon top $100 a barrel.
“By 2012, surplus oil production capacity could entirely disappear, and as early as 2015, the shortfall in output could reach nearly 10 million barrels per day,” says the report, which has a foreword by a senior commander, General James N Mattis.

Unfortunately we now live in a world with a serious substance abuse problem.  The entire population is dependent on fossil fuels because of an intentional lack of research and development into alternative fuels during the latter half of the 20th century.  The infrastructure has been intentionally forced into this dependence, and moving away from it has been intentionally stagnated by the “powers that be,” those who have a vested financial interest in making sure the population has continuing dependence on gasoline.

It’s worse than you think.  They’ve known the whole time.

If you don’t think the thinktank’s and government geniuses knew about the problem, you are wrong.  No later than the oil crisis in 1973, it would have been criminal not to research the environmental problems and economic issues caused by oil dependence.

The effects of the embargo were immediate. OPEC forced the oil companies to increase payments drastically. The price of oil quadrupled by 1974 to nearly US$12 per barrel (75 US$/m3).[19]

The effect of the Arab embargo had a negative influence on the U.S economy through causing immediate demands to address the threats to U.S. energy security.[25] On an international level, the price increases of petroleum disrupted market systems in changing competitive positions. At the macro level, economic problems consisted of both inflationary and deflationary impacts of domestic economies.[26] The Arab embargo left many U.S. companies searching for new ways to develop expensive oil, even in the elements of rugged terrain such as in hostile arctic environments. The problem that many of these companies faced is that finding oil and developing new oil fields usually require a time lag of 5 to 10 years between the planning process and significant oil production.[27]
http://en.wikipedia.org/wiki/1973_oil_crisis

The response of the United States government and their allies?  Begin a systematic and concerted information operation on the world for the purpose of not only continuing this dependence, but take control of the scarce resource through the use of terrorism and war.  At the same time oil producing nations were beginning to realize that their scarce resource made them the most powerful economic force in the world, the Central Intelligence Agency and their allies began financing false flag terror attacks, ultimately culminating in the tragic events of September 11, 2001.
http://www.thereligionofpeace.com/pages/americanattacks.htm
http://www.tomdispatch.com/post/1888/michael_klare_on_oil_wars_and_the_american_military
http://www.thedebate.org/thedebate/iraq.asp
At the same time, research and development into electrically and nuclear powered vehicles would be stopped by lobbying and governmental intervention.  As early as the late 1950’s Ford had thought of, and planned on developing nuclear powered vehicles.  Our own military has used nuclear power for its submarine fleet’s since the 50’s as well.  If this doesn’t prove foreknowledge of the catastrophic effects of oil dependence, nothing will.
http://www.ridelust.com/ultimate-automotive-fireworks-1958-ford-nucleon-concept/

Even worse, it’s nothing short of Evil.

As early as the 1970’s the scientific community was beginning to notice the climate change problem. EPA reports and the international community was complaining of ozone depletion an climate change as a result of the burning of petro-fuels.  CFC’s were banned, but nothing was done to change the infrastructure designed to force individuals to purchase oil (and power derived from the burning of fossil fuels) in order to power their personal vehicles, heat their homes, and a way of life that would be nearly free today, had we begun developing alternative power sources for the public in the 70’s when the problem became…. obvious.

Today, we produce more oil, and charge more for it than ever before in history.  We have the technological means to be completely free of this ecosystem, responsible for the systematic destruction of our environment, and the intentional subjugation of the population based on forced dependence on oil.

We are systematically killing our children to steal oil from the Middle East, Iran should be very scared of what is to come.  Protests of the War on Terror are nearly non-existent, compare what is going on now to the response to the Vietnam War.. today, “supporting our troops” means paying multinational corporations all of our money to power our cars, and sending our children off to steal something we don’t even need from people that have been oppressed by their governments for thousands of years.

The people responsible for creating this system… knew the whole time, and they’re doing it on purpose.

If that’s not ritual self mutilation, I don’t know what is.