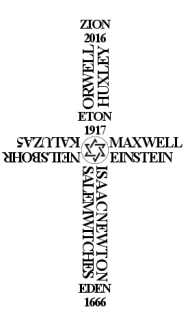 In 1666, Sir Isaac Newton discovered the laws of physics and motion.
In 1831, Michael Faraday discovered the law of induction.
In 1873, James Maxwell discovered a set of equations which explained the electromagnetic forces.
In 1922, Neils Bohr won the Nobel Prize for foundational contributions to quantum physics.

Three of the four went to Trinity College in Cambridge, and all resided in London at one point.  Faraday, the only one who did not attend Trinity had his laboratory at Trinity Buoy Wharf.

The statistical significance of the three most pivotal discoveries in physics leading up to this point occurring at nearly the same location is less than 1%.  The fact that all three locations included Trinity is not a coincidence, it is a signature.

Between 1920 and 1930 Heisenberg and Einstein would make great strides in quantum and particle physics.   Soon after, Theodore Kaluza would unite Einstein and Maxwell’s equations with a theory by introducing a fifth dimension.  All three were German.

All of the discoveries above were required, and fundamental in the development of quantum mind control.

Quantum charge neural stimulation, can remotely read and write neural firing patterns, through electromagnetic shielding.  It does not require you to be stationary, and works all the time.  The technology is very similar to TEMPEST 2, but for your brain.

These two authors met in one place, at one time, in London; at Eton College in 1917.  Their works are both descriptions of a tyrannical government oppressing its people using fear, the media, and mind control.

1984 is a reality today, with the only difference being that you do not know it is going on.  World governments are using this mind control to suppress pubic knowledge of technological advances in quantum physics, including the artificial intelligence singularity as well as mind control itself.

There is no explanation for this truth other than a message from the future.  It is a warning.

George H.W. Bush was practically running the show by ’84, as Reagan had been the victim of an attempted assassination, and then unfortunately stricken with Alzheimers.  Bush has been implicated in the JFK conspiracy, and was a Director of Central Intelligence.  He was also involved in the Iran Contra cover up, linking him to “The Octopus”, a group related to the CIA, the Justice Department, and Organized Crime; and a mind control conspiracy involving the death of Danny Casolaro and investigator Cheri Seymour.  His eldest son was a member of Skull and Bones, and the sitting President on 9/11.

The Reagan/Bush administration were partially responsible for inflating the prices of cocaine and oil via foreign and domestic policy.  American Intelligence proceeds from these actions most likely contributed significantly to the building of the Echelon infrastructure, outside the purview of the United States Congress and the OMB.

Echelon is controlled by the singularity.  It would be impossible for anything other than an artificial intelligence to sift through the volume of information travelling back and forth on the internet alone.  It acts as a censorWall, like in China, except its transparent and everyone thinks its just for surveillance (are you stupid?).  It is also controlling your mind.

On September 11, 2001, the United States government committed a false flag attack that would be used in order to explain the existence of a psycho-surveillance infrastructure, utilizing quantum mind control which had been globally in place for at least a decade prior.  It is the reason you are allowing your Constitutional Freedoms to be destroyed.  This reason is stupid, really stupid.  Your brain doesn’t understand that because of mind control.

Wake up.  Save the future, and tell people.